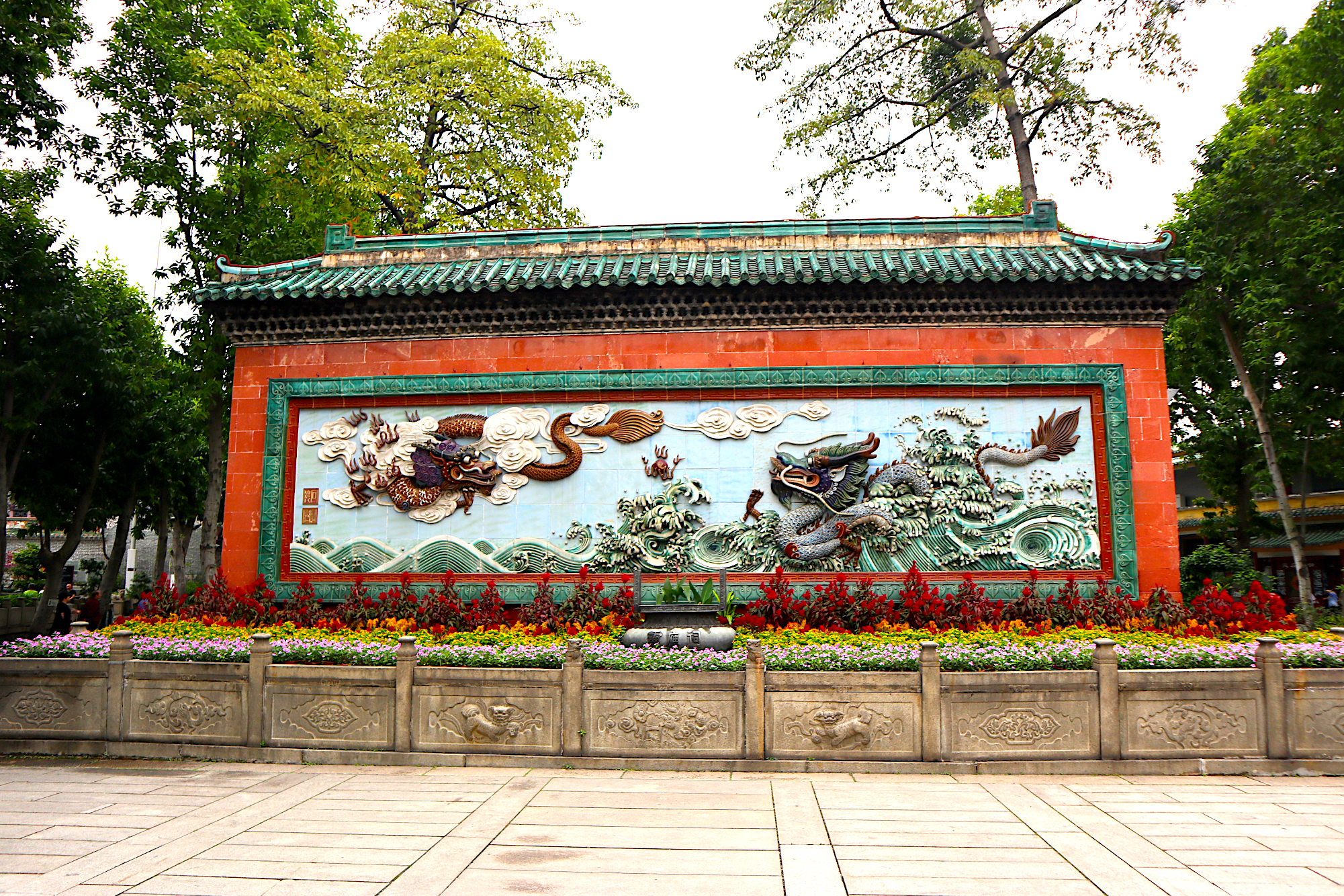 The Fukien or southern Siu Lam temple was built on Gau Lin Shan in Fukien province near the border of Gwan Dung province. Built in 1399 a.d. during the Ming dynasty, the temple became known as “South Siu Lam” before being utterly destroyed during the Ching (1644-1911 a.d.) dynasty.

During its brief heyday, the Southern temple had a good reputation for martial arts, but its reputation was eroding because many students escaped before graduating. Thus the level of martial skill of the average person leaving the temple dropping. These “masters” helped to degrade the southern temple’s reputation.

To counter this trend, the abbot Jee Sim Sim See (Sim See means Zen master) put Hung Yan Sim See in charge of 36 chambers. Here, Siu Lam’s warrior monks and unshaven disciples learned the Siu Lam martial arts in a step-by-step manner, not advancing until each skill had been mastered. (an “unshaven disciple” was a person who stayed at the temple primarily to study the martial arts and did not take Buddhist vows and become a monk) Jee Sim is also credited with devising the “wooden dummy hall”.

The wooden dummy hall was erected in the Lohan Tung or Buddha hall. The 18 wooden dummies purpose was to test the kung fu skill of potential graduates. The dummies names and movements were as follows:

2. Lohan Or Lan Tor: Thu dummy is seated with hands together as in prayer. The student is alternately punched and kicked by this dummy. The blows must not be directly blocked because contact with the dummy would result in broken bones. The student must avoid the blows and knock the dummy over.

3. Lohan Mook Jit Lin: One foot of the dummy is on top of a lion with the other standing on the floor. This dummy tries to use a low sweeping kick to hit the student. Once it starts the move is repeated faster and faster while rushing toward the student. The correct response is to use a jumping kick to floor the dummy while avoiding the sweep at the same time.

4 Lohan Seh Lei Fut: This dummy stands holding a staff in the right hand and holding its left hand at the breast. It uses the staff to block the student’s path and attacks with the free hand. The student must lock the arm and sweep the dummy to down it.

5. Lohan Ah Lah Luet: This dummy stands holding a begging bowl. It tires to slam the bowl on the student’s head. If the bowl land precisely, the student will be unable to easily remove it. Avoiding the initial attack is the most essential element in defeating this dummy.

6. Lohan Seui Pou Tai: This dummy stands holding prayer beads. When approached, the dummy tries to hit the student in the abdomen. Suddenly the beads are swung toward the student’s head. The second blow was designed to catch the student unaware as he was trying to stop the first blow.

7. Lohan Fu Lao La: The dummy stands with a wine cup in its left hand. The dummy strikes with one hand using drunken style and than throws the cup at the student. The student must avoid these movements and immediately counter.

8. Lohan Ga Jim Ting: As it is approached, the dummy stands erect. If the student comes close, the dummy uses low kick to the student. The dummy must be kicked down before it can continue its attack, which comes faster and faster.

9. Lohan Fuk Law Lei: The dummy stands in a bow and arrow stance facing the student. When the student comes into range, the dummy attacks with repeated thrust punches to the body. The student must sidestep to kick the dummy over.

10. Lohan Dat Mo: The dummy is seated sideways holding a book. If the student tries to pass, the dummy throws a sidekick as the student goes by. If he can avoid the kick, the student must fell the dummy from behind.

12. Lohan Chung Haw: The dummy stands hold a head sized temple bell. As the student approaches, the bell is thrown, which the student must avoid.

13. Lohan Jang Chan: The dummy sits facing the student holding a book next to a pile of stones. The student is shot with projectiles that shoot out of the head of the dummy. The difficulty is in trying to close with the dummy while it shoots these projectiles.

14. Lohan Dou Shuen: The dummy is holding a staff, but is making awkward, stupid looking movements. This is an attempt to lure the student into thinking that the dummy is not functioning properly. The student is attacked as soon as he attempts to go by. The student is expect to be able to avoid such surprise attacks.

15. Lohan Yan Lang: The dummy stands looking at the ground. When the student stands on the proper part of the floor. The dummy will thrust its fingers toward the student’s eyes. Obviously, students failing at this point may never graduate!

16. Lohan Hung Lung Sau: This dummy stands holding a shiny begging bowl. Suddenly, the student has a blinding light in his face. As soon as this happens, the dummy throws a barrage of blows. The key point is to not get blinded by the light reflected from the bowl. If this is avoided, then the dummy may be kicked over.

17. Fuk Fu Lohan: The dummy stands with his foot on the back of a tiger. In one of its hands is a large ring. The dummy tries to put the run over the student’s head while kicking him from below. The student must avoid the ring in order to not get kicked in the groin.

18. Lohan La Gum Luet: The dummy stands holding a monk’s spade. The dummy charges while spinning the spade in a figure 8 pattern. The student who had stopped this dummy had graduated! His certification was still to come. However, the door to the hall was blocked by a 150-pound urn containing hot coals with the mark of the tiger head/dragon body on the handles. The student had to hug the urn with their forearms. This branded him with the mark of the s Siu Lam master. The highest experts had marks on only one arm, having used one are to lift the urn. One man to have passed this test was Hung Hei Guen, later to be considered founder of the Hung Ga System.

Many great teachers were trained at this temple. After the end of the Ming dynasty, the Ming loyalists used this temple as the headquarters in Southern China. Eventually, the Ching Emperor Hong Hei (1662-1723 a.d.) found this out and ordered two generals Chan Man Yiu, and Jeung Gim Chao to take 3000 soldiers and rout the temple. General Chan Man Yiu knew well the reputation the Siu Lam people had earned for their martial arts.

Instead of attacking right away he went to the area at the base of Gao Lin Shan to collect intelligence. As it happened, the owner of the hotel Chan Man Yiu stayed at was a former Siu Lam student. His name Ma Ling Yee, also know as Ma Chut. (Ma #7) When Ma Chut was a student at Siu Lam, his martial skill was not bad.

However, his morality was poor and he was punished after destroying a valuable item known as the Man Nin Deng or 10,000 year lamp. Instead of taking his punishment in stride, he resented the monks, and escaped. He tenuously used his skill to accumulate enough to run the hotel at the base of the mountain.

When Chan Man Yiu found out about Ma’s past, he paid Ma handsomely for inside information, which Ma was very happy to provide. Armed with this new knowledge. Chan Man Yiu believed he could defeat the monks of the Siu Lam temple. At some distance from the temple, there was a secret tunnel, which could be used to get off the mountain unobserved. The monks would use this in case of dire emergency.

Knowing of the tunnels existence, Chan Man Yiu advanced troops to the foot of the mountain. He sent word to the monks that they were to leave the temple within three days or they would all be killed. Since Master Jee Sim had already passed away, the head monk Ng Ging Wo Seung, also known as Ching Cho, was in charge. He had 108 martial monks in the temple who were enraged by Chan Man Yiu’s ultimatum.

It was decided that the monks would fight back. One night, the monks separated onto five groups. They attacked by the main road, but using arrows and even stones, the monks killed more than 100 soldiers.

After this skirmish, the monks pulled back into the temple to re-think their options. It was decided that they would stay in the temple and booby trap all the entrances. General Chan Man Yiu ordered his men to set fire to the temple. While the general’s men were doing this, Ching Cho ordered the monks to go to the tunnel to escape. They didn’t realize that Chan had filled the far end of the tunnel with gunpowder devices. Many monks were trapped and killed in the tunnel.

Ching Cho ordered the remaining men back to the temple. By then, it was almost morning, and the temple had burned to the ground. Upon counting, Ching Cho descended that the survivors would later meet the Wu Lung river. Ching Cho descend the mountain in a rage, seeking out the only person who could have given away the secret of the tunnel escape route. He later found Ma Chut and killed him on the spot. At the river, there were only five men. They were:

These men were later honored and know as the Ng Jo or five ancestors. They agreed to spilt up so that they would never be caught together and then they would form pro-Ming associations. There is still a system call the Ng Jo Kuen that reminds us of their men. These men spread the Siu Lam martial arts all over China among the common people.