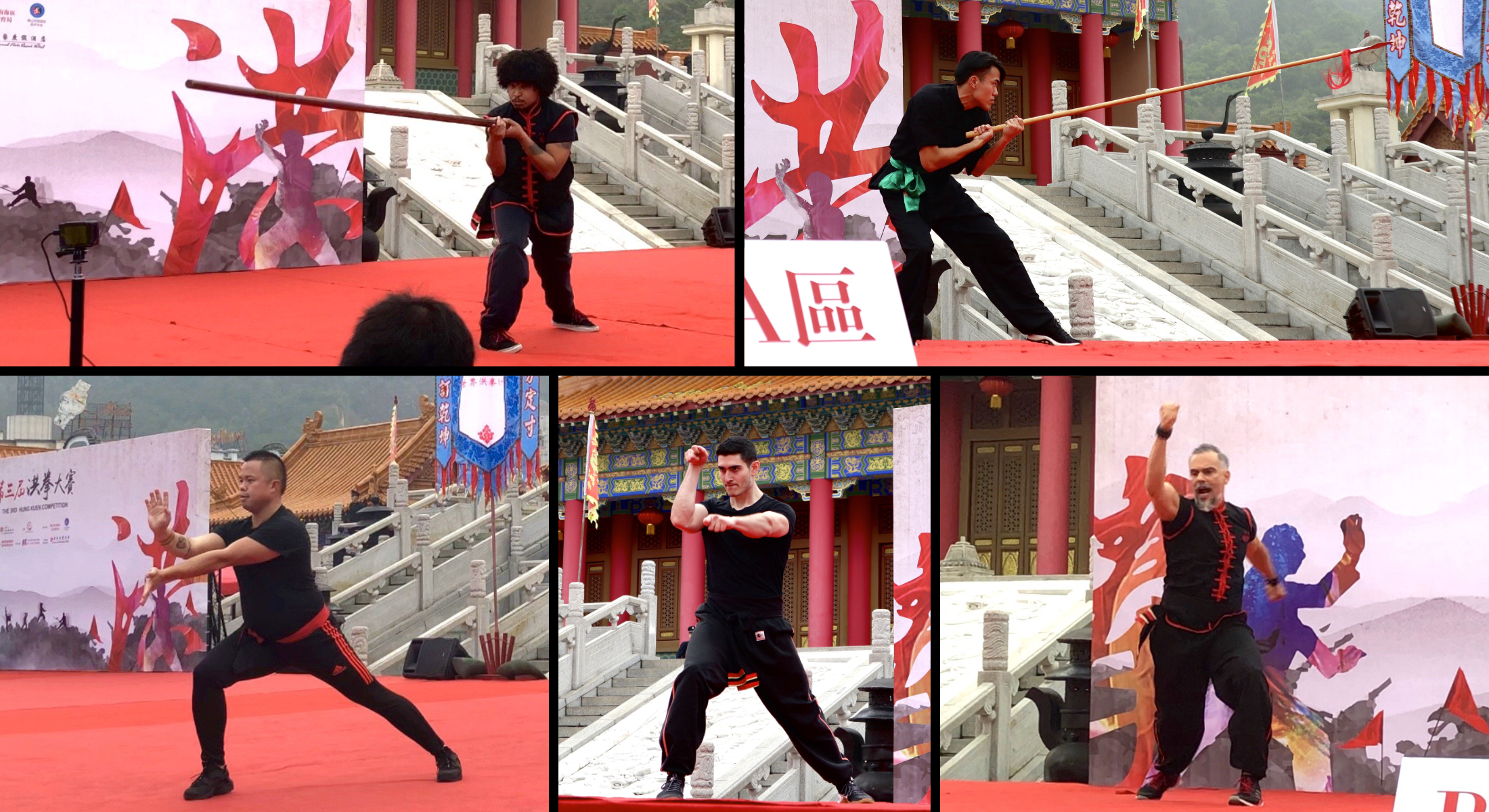 Hung Ga is one of the most popular kung fu systems to originate from Kwang Tung (Canton), China. It is one of the five family systems passed down from the teachings of the Siu Lum Monk, Gee Shim, who taught five disciples surnamed Hung, Choy, Lay, Lau, and Mok. Hung Ga, named after Hung Hei Guen, is a powerful style which encompasses the hard, long range offense of the Fu Ying (tiger form) and the soft, short range fluid defense of the Hok Ying (crane form), the evasiveness of the Lung (dragon), the precision of the Sae (snake), the swiftness of the Pao, (leopard) and the application of the Ng Hang Kuen (five element fist). The following is a brief outline of the major and minor forms of Hung Ga:

(Subduing the Tiger in an “I” Pattern): This form teaches the basic stances and techniques of the five animals and five elements, develops wind, and sets the foundation of the Hung style. It is traditionally the first form taught in Hung Ga.

(Tiger and Crane Double Form): This is the most famous form of the Hung Ga style and the core of the entire system. Whereas Gung Ji Fuk Fu Kuen is a basic training form, Fu Hok Seung Ying develops fighting technique and stresses the cultivation of the tiger and the crane forms. The crane develops Bin Ging (whip power – soft), whereas the tiger develops fighting spirit and fierceness (hard power).

(Moon Flowing Single Broadsword): This is the first weapon taught in the Hung style and lays the foundation for the use of all short weapons. It develops strength, flexibility, evasiveness and precision. In Northern China the straight sword and the spear are the weapons commonly used, whereas in the south the broadsword and the pole (staff) are most popular.

(Five Animals Fist): This form teaches the techniques of the five animals: the Dragon form develops the Spirit, the correctness of breath, the use of the waist and the twisting of the stance; the Tiger form instills fierceness of spirit, develops clawing techniques and strengthens the bones and tendons; the Crane form teaches grace, control, balance and trains the sinews; the Snake form trains the fingers, promotes chi circulation, control and teaches strikes to the vital points of the body; the Leopard form teaches the “tsop choy” (piercing jab) and the use of speed and strength.

(Fifth Brother Eight Diagram Pole): This form was created by a famous spear master of the Sung Dynasty, the fifth brother of the Yang family. After losing a major battle, this General joined a temple and became a monk where he adapted his spear techniques to the staff (pole). Due to its spear influence, techniques in this form are delivered primarily with one end of the pole, thus it is called a single ended poled form. This form lays the foundation for all long weapons.

(Mother/Son Twin Swords): This form is named as such because both swords are used as a team, one following the other closely, like mother and son. In other kung-fu styles, these swords are called “‘Butterfly Knives”. This form lays the foundation for the use of all double weapons.

(Spring Autumn Great Knife): Otherwise known as the “Kwan Do”‘, this long handled weapon concentrates on large strong movements while cutting and thrusting. Practicing this form strengthens the entire body.

(Yu Family Tiger Fork): The tiger fork is a long handled trident originally used to hunt tigers. Practitioners of this weapon become unusually strong and quick, as this weapon is is heavy and difficult to maneuver. This form is reserved for advanced practitioners only.

(Iron Wire Fist): Developed by Tiet Kiu Sam, a member of the Kwang Tung Sup Fu (Ten Tigers of Canton), Tiet Sing Kuen is the most advanced form in Hung Ga. The form trains the body to open and close, and float and sink. Most importantly, this form develops the twelve bridges and the correctness of breath.

Otherwise known as the “Muscle Changing Classic“, this form was first taught by Dat Mo (Bodhidharma) to the monks of the Siu Lum Temple (Dat Mo brought Chan Buddhism to the Siu Lum Temple). This form trains the entire body through fourteen “Hei Gung” (breath training) and ‘Paida’ (beating) exercises.